It is good to see that the Town Centre Connectivity Project has raised such interest in the town. The Neighbourhood Plan is an integral part of the Town Council’s plan of being able to have more say in planning decisions in the Town over the next 15 years. Too often decisions have been made about the Town by District and County Councils which have not reflected the view of those who actually live in the Town.  The Neighbourhood Plan has to be approved by the Town Council, East Suffolk Council and by resident referendum before it is formally adopted by the town and it forms the guidelines for future developments.  The Neighbourhood Plan process is funded in the majority through grants from Central Government. The Town Council provides a small annual budget (up to £1k) from the precept and last year provided financial support for the connectivity study up to £10k which can be funded from the Community Infrastructure Levy (a tax on developers); this represents a relatively small investment compared to the potential returns once the Plan is delivered. A successful Neighbourhood Plan would mean that the Community Infrastructure Levy money that is provided through developments would increase from 15% to 25% which would make a considerable contribution towards the town’s infrastructure in future years.

The Neighbourhood Plan group looked at what residents told them about the town and what they thought was needed in the next decade. They realised they needed some expert help in taking people’s ideas and turning them into potential projects. The Neighbourhood Plan group wanted somebody with fresh eyes to look at the Town, which is why the group selected the We Made That architects who were highly rated for their work in this field. The recent survey by We Made That on connectivity in the Town is only part of this process.  The group have already engaged with local organisations and residents’ focus groups on other aspects of the plan.  A successful Neighbourhood Plan needs this kind of input. There are lots of steps including more consultations before any of the ideas mentioned in the survey could become a reality.

Click on the report front cover below to see We Made That’s final report about the Town Centre. 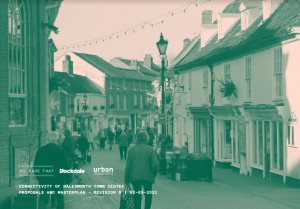 The group will be putting together an event for residents to explore the draft plan soon – keep a look out for details.

Below is information as to what a Neighbourhood Plan can and can’t do and how it can support the town.

A summary of all your likes and concerns you have told us through our various forms of consultation. 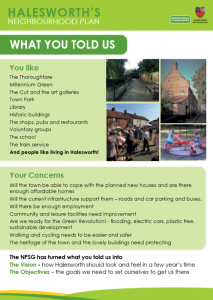 A lot will need to be done to turn the Vision into reality. We think our suggested Objectives will do this. Over the next few months, with your help, we will develop planning policies that flesh out each Objective and these will form the key part of our Neighbourhood Plan. 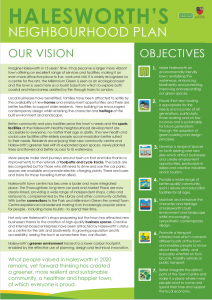 Below are the Design Code and Housing Needs report that the group comissioned. They are not actual Neighbourhood Plan proposals but rather form part of the evidence base to be used to write the policies in the plan.